Coffee drinks loaded with calories and sugar could be sabotaging your weight loss efforts.

Instead, consider sipping on a warm mug of soothing tea. Over time, this could end up saving you thousands of calories and help you lose weight.

Tea is one of the most popular beverages consumed around the world. It is actually the second most consumed beverage in the world, second only to water. For thousands of years, people have been drinking tea for its medicinal properties.

Drinking tea is associated with a vast number of health benefits. Studies show it is protective against cancer, heart disease, and neurological disorders.

Tea has been shown to have anti-diabetic, anti-aging, antioxidant, and anti-inflammatory properties (13).

Research is ongoing to identify the different components of tea that exert these health benefits. Most of the health-promoting effects of tea are attributed to its powerful antioxidants.

Considering the health benefits of tea, you might be wondering if tea can help with weight loss. The answer is yes.

All groups come from the same Camellia Sinensis plant but vary in processing techniques. It is the different techniques that result in variations of color, taste, and aroma.

These 3 groups can be further broken down into categories based upon the degree of fermentation. But to keep things simple this article will focus on the 3 main types of tea for weight loss.

Oolong tea is a traditional Chinese tea with its own unique aroma and taste. Its rising popularity is largely due to its role in supporting weight loss.

Several possibilities exist to explain the effects of oolong tea on body weight. One explanation is through its beneficial effect on metabolism by increasing fat oxidation.

This means that oolong tea helps the body use fat for fuel.

This occurred despite being fed a high-fat diet. It is also reported that oolong tea increases fecal fat excretion.

Green tea is one of the most extensively studied beverages in the world. Its popularity is chiefly due to its beneficial effects on a wide variety of ailments. Especially for its effects on metabolism and weight.

Studies show that green tea can induce weight loss. As with oolong tea, scientists remain unclear on the mechanisms at play.

When it comes to weight loss most people think of green tea. But research also supports the role of black tea in reducing body weight. Scientists propose two ways that black tea may fight obesity.

The first is by inhibiting fat digestion and absorption, thereby reducing calorie intake. The second is by promoting fat metabolism and decreasing fat accumulation.

How Much Tea to Drink

1 to 2 cups of tea daily is a reasonable goal to start with. Increase to 3 or 4 cups per day if desired.

Please note that tea contains caffeine, although not as much as a cup of coffee. But several cups of tea can add up. So if you are trying to limit caffeine, then you’ll need to limit your tea intake.

Drinking tea is generally safe. As always check with your doctor before introducing something new into your diet.

Especially if you are currently suffering from a heart, liver, kidney, or blood condition. Pregnant and lactating women should limit beverages that contain caffeine.

The tannins in tea can reduce iron absorption. So if you are deficient in iron, it’s best to drink tea separate from meals.

Experts advise against taking green tea extract-based dietary supplements. This could have toxic effects on the liver.

How Much Caffeine Is in Tea?

Green, black, and oolong teas are all made from the Camellia Sinensis plant. All teas made from this plant contain caffeine in varied amounts.

This is significantly less than coffee, which can range anywhere from 100 to 200 mg per cup.

If you are trying to avoid caffeine, there are a variety of herbal teas you can try. Herbal teas are not made from the Camellia Sinensis plant. Thus they are not considered true teas.

Instead, herbal teas are made from other plant parts, namely leaves, stems, roots, fruits, buds, and flowers. Popular herbal teas include chamomile, ginger, mint, and lemongrass. Check the label to make sure it says caffeine-free.

Tea is a popular beverage worldwide. Throughout history, tea has been used for its medicinal properties. Interest in tea has exploded due to its role in supporting weight loss and for its beneficial effects on metabolism.

There is no magic bullet when it comes to weight loss but drinking tea may help support your weight loss efforts. Especially if you substitute high-calorie, high-sugar beverages with unsweetened tea.

This reduction in overall calorie intake alone can lead to weight loss. Plus, as an added bonus, you get the added health-protective effects of tea.

Lisa Rainer, MS, RD is a registered dietitian nutritionist and mom of three. She earned a Master’s Degree in Nutrition from California State University, Northridge. As a graduate student, her research was published in the Journal of the American Dietetic Association. She has worked in a variety of settings as a clinical dietitian, renal dietitian, freelance writer, and in private practice. In her spare time, she loves to be out-of-doors hiking, biking, or watching her children play in their sports activities. 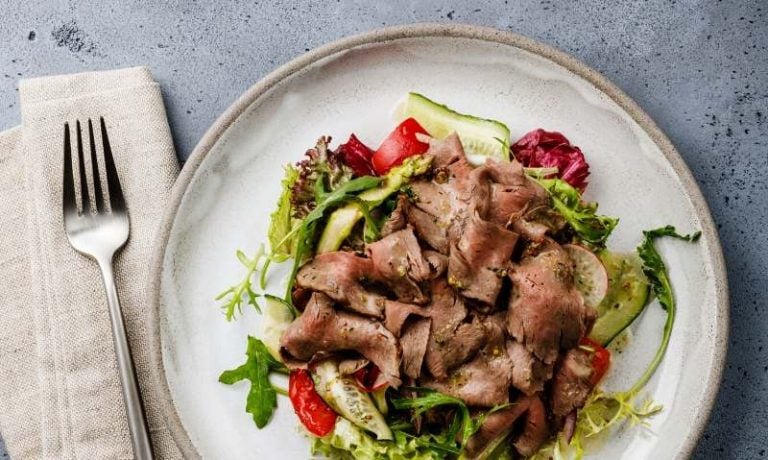 Poached with runny egg yolk to perfectly scrambled, eggs are one food we can’t get enough…

This rich dark chocolate banana smoothie is a tasty treat that’ll boost your heart health. The…

In recent years, hummus has risen in popularity and is no stranger to grocery store shelves….