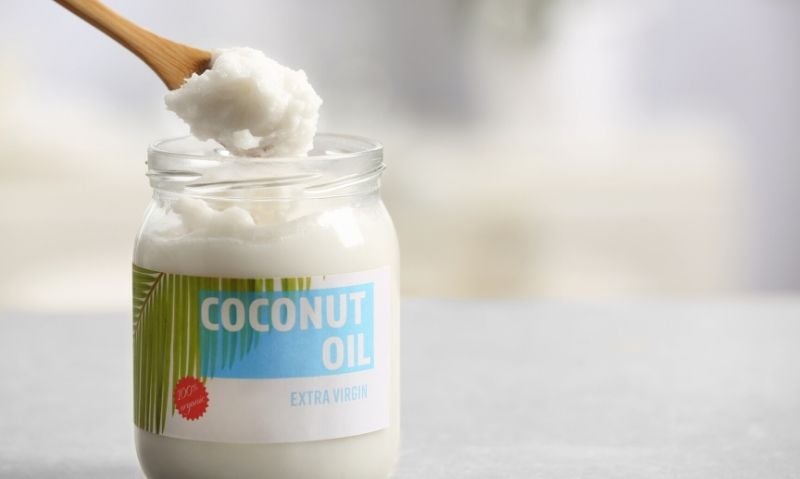 Coconut oil has a wide range of health benefits thanks to its unique mix of fatty acids.

While its benefits like fat loss and better brain functions make it a must-have in the kitchen, but coconut oil uses go far beyond your cooking.

Here are the 11 best uses and benefits of coconut oil.

So What Is Coconut Oil?

Coconut oil is the edible oil extracted from the “meat” or kernel of a mature coconut. Coconut oil can be extracted using varying methods, which produces different oil types such as unrefined and refined.

At room temperature, coconut oil is solid, and it only begins to melt at 76F.

This makes coconut oil is shelf-stable, making it perfect for both uses as skincare and in cooking.

Here are 11 ways you can use and benefit from coconut oil at home.

1. Use as a Healthy Cooking Oil

Coconut oil’s high smoke point makes it suitable for all types of cooking and baking, especially for high heat cooking like frying and baking.

Coconut oil contains a specific type of fatty acid that sets this oil apart from the rest. Unlike others, 90% of the coconut oil is saturated, and 40% of which is lauric acid.

Lauric acid is a type of saturated fat known to be healthier thanks to its medium-chain triglyceride or MCT.

This MCT makes lauric acid easier for the body to absorb and bears additional health benefits.

This type of fat lauric acid makes coconut oil highly resistant to oxidation during high heat cooking. In simpler terms, coconut oil doesn’t go rancid till it gets really high heat, unlike most other cooking oils (1).

Believe it or not, exercising and decreasing your total calorie intake are not the only two ways to lose weight and burn fat.

Adding certain types of foods like coconut oil to your diet can affect your body hormones in ways that increase fat burn and fasten your metabolism.

The medium-chain triglycerides such as lauric acids have a specific chemical structure that allows your body to absorb them whole. This makes these particular fatty acids more digestible.

This means your body gets to process them similarly to carbs and use them for energy.

This is how coconut oil can positively affect your metabolism as well as increase your calorie burn compared to that of longer chain fats (2).

This is also well proven by a study done on daily consumption of 15-30 grams of medium-chain triglycerides. The results showed a 5% increase in calorie burn which is about 120 calories per day (3).

Using coconut oil in your cooking is a great way to boost your metabolism, lose weight and burn fat.

3. It May Help You Lose Belly Fat

And that’s a great benefit. As we know, stomach fat is famously the most dangerous fat in the body, especially the deep visceral fat near your organs.

And it has been strongly linked to all sorts of diseases including cancer, type 2 diabetes, and heart disease.

If you have excess abdominal fat, it’s important you take steps to lose it.

Luckily, coconut oil may help rescue, thanks to its medium-chain fatty acids.

According to a study involving 40 females with belly fat obesity, coconut oil helped reduce their waist circumference when compared to taking soybean oil (4).

Another study with 15 women saw virgin coconut oil helped reduce their appetite more than when they took extra-virgin olive oil when mixed into breakfast (5).

Though some researches have promising results, the evidence is still limited and not yet conclusive.

Take it as a grain of salt, and you may just be pleasantly surprised by its added benefit like this belly fat reduction.

4. It Can Decrease Your Appetite and Increase Satiety

The fatty acids in coconut oil are known to decrease hunger and increase satiety.

This may be due to how the body metabolizes fat as opposed to carbohydrates.

Ketones or “ketone bodies” are made when fats are broken down for energy when carbohydrate intake is low. When the body is in a ketosis state, where it’s breaking down fat and using it as energy, it can have a hunger-reducing effect.

This was evident in one study done on 6 healthy men.

They were fed varying amounts of medium and long-chain fatty acids, and those who took most ate 256 fewer calories a day on average (6).

Another study with 14 healthy men saw a similar result. Those who ate the most amount of medium-chain fatty acids with breakfast had fewer calorie intake later that day (7).

One of the powerful benefits of coconut oil is its possible function to aid the treatment of epileptic seizures.

The most frequently used therapy for seizures currently is a high-fat, low-carb diet known as the ketogenic diet (8).

By limiting carb intake and increasing fats by a large margin, this diet produces the body ketones from fat.

These ketones are what serve as the brain’s main energy source in times of need. In fact, when blood sugar runs low, the body ups the production of ketones to secure the brain sufficient fuel.

Coconut oil can help with the availability of ketones thanks to its medium-chain triglycerides feature (9).

The MCTs allow the liver to process the oil directly into the ketone body, which results in inducing ketosis.

This allows a bit more room for carbs in the ketone diet – a much-appreciated change.

Not only that, the use of coconut oil in the keto diet has been linked to the prevention of epilepsy seizures with far fewer side effects compared to prescription drugs.

Coconut oil helps with seizures in one additional way. Coconut oil’s anti-inflammatory is known to help with brain inflammation caused by epileptic seizures.

Dementia, most known as memory loss, impairs many other cognitive abilities including the ability to source glucose as fuel in parts of the brain.

Coconut oil’s fat type, medium-chain triglycerides are particularly helpful in Alzheimer’s cases due to their ability to turn fat into ketones (11).

The brain then can use the ketones as the main energy source, reducing the symptoms of Alzheimer’s.

Not just oil, coconut foods are said to be brain food, improving the overall brain health, as well as chemistry and cognitive functions.

Add coconut oil to your daily meal plan by using it to bake, stir-fry, and marinade. It may lead to the prevention of memory loss as well as the reduction of dementia symptoms.

7. Moisturize and Nourish Your Skin

Coconut oil is excellent for your skin.

It can be used as an effective moisturizing lotion on all skin types including dry skin.

The natural antioxidant properties in coconut oil help moisturize the skin and prevent your skin from flaking and drying out.

It also aids treatment for various skin conditions such as dermatitis, psoriasis, eczema, and extreme dryness.

Thanks to these benefits, coconut oil has been used as a base ingredient for many skincare products including lotions, creams, and soaps.

Thanks to antioxidant properties, this tropical oil has been said to prevent wrinkles and sagging of skin. Add this oil to your anti-gain skin regimen!

Another beneficial use of coconut oil is hair care.

To prevent dandruff and keep hair healthy, many apply the oil directly into the scalp on a daily basis.

According to one study, coconut oil’s effects far exceed that of sunflower oil and other mineral oils.

Compared to the other oils, coconut oil showed a significant reduction in protein loss in hair and overall hair damages.

Researchers believe that lauric acids in coconut oil may bring these tremendous benefits and help penetrate the hair shaft in ways other fats can’t (12).

This was evident in a few animal studies. Coconut oil was shown to provide anti-inflammatory effects.

Some human studies also support the findings. They found coconut oil may reduce markers of inflammation and oxidative stress especially in comparison to high unsaturated fats.

Believe it or not, the cause of body odor is not the sweat itself. In fact, it’s the bacteria on your skin that produces odors.

So it’s not surprising antibacterial properties found in coconut oil can help reduce the unpleasant odors.

Combining coconut oil with a few other natural ingredients, you can make yourself a natural odor-fighting deodorant with no harsh chemicals.

If your body were to describe coconut oil, it would be quick energy.

This greatest benefit and differentiator of coconut oil comes from its one unique feature: medium-chain triglycerides.

From fat loss to increased satiety, seizure treatment to dementia prevention, coconut oil’s contributions to your better health is greatly indebted to its ability to metabolize fat fast and use it as energy.

Put simply, it serves as a quick energy source for your body and brain.

She co-founded Fitwirr to make health and fitness simple for everyone and share her tips through writing evidence-based articles on nutrition, weight loss, and exercise.

Many of us have heard about the health benefits of dark chocolate.  Grocery store shelves now…

What’s the best multivitamin for women over 50? With so many varieties of supplements marketed towards…

Belly fat fighting foods can help you with losing abdominal fat, according to a dietitian. Studies…

Looking for some healthy salty snacks to satisfy your salt craving? Everyone craves salt every now… 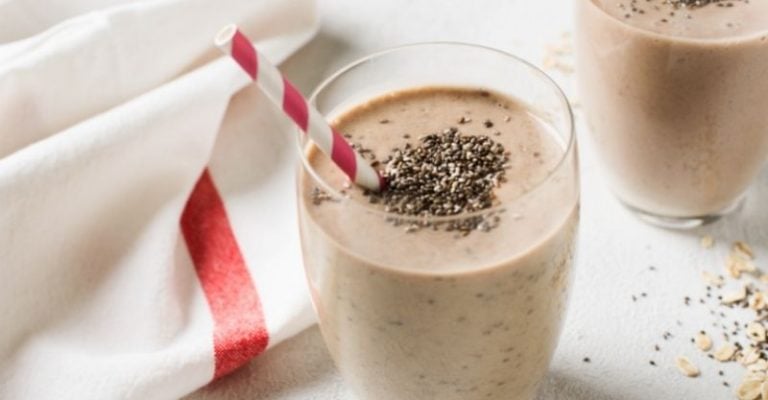 This super-rich oatmeal smoothie is a smoothie lovers’ heaven. It’s a tasty non-dairy smoothie with a…